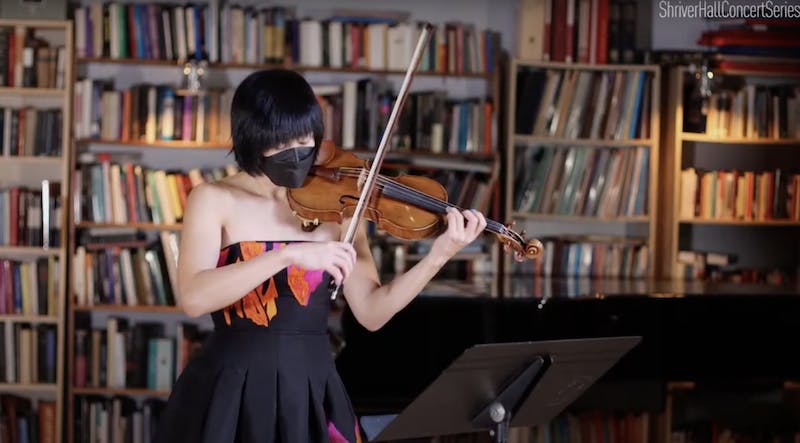 Violinist Jennifer Koh gave a powerful performance for the Shriver Hall Concert Series on April 11. Koh performed selections from alone together, a project she launched at the start of the pandemic. Her rendition of Ellen Reid’s “Brick Red Mood” was unusual due to its resemblance to an assemblage of discordant notes that sounded like someone shouting. This piece opened my eyes to a form of classical music that I had never encountered before.

Unsure of its meaning, I pondered the title “Brick Red Mood”. The melancholic tone of the piece seemed to represent a heartbreaking feeling.

Among the selections of alone together, another piece that struck me was “Mina Cecilia’s Constitutional” by Patrick Castillo. Again, I wasn’t sure what the title suggested, but I enjoyed the high-level manual techniques required for the piece.

The piece began with the rapid crossing of the strings using harmonics, which gave it an airy feel. In one part of the piece, his left hand slid up and down the violin fingerboard, creating an eccentric, slippery sound.

She also performed “Shiner” by Cassie Wieland. I was in awe of the vivid image created by the sounds embedded in this piece. The high, short notes of the pizzicato sounded like speckled stars in the sky, something the title of the piece may have been referring to. The following small bowings accentuated the nocturnal scene created by the pizzicato.

From another set of selections from alone together, I found Koh’s performance of Katherine Balch’s “Cleaning” to be very memorable. She changed from her violin bow to a purple latex glove and simulated cleaning the violin by vigorously rubbing against the string. A creaking sound emanated from the violin, followed by a light tapping, which sounded like water droplets. The piece ended suddenly with a pizzicato hit from the four strings.

The latest round of selections from alone together consisted of two rooms. Of the two, I was intrigued by Darian Donovan Thomas’ “Art/Nat” with electronics by Ian Chang. Koh’s violin notes served as the background for a voiceover that was played over it. It was a string of words that hinted at a time of change.

Koh also performed JS Bach’s classic Violin Partita No. 3 in E major, “Bach-Werke-Verzeichnis 1006”. Compared to other performances of this piece, such as those given by Hilary Hahn, Koh packed every note with more force. My perception of the piece quickly changed from “elegant” to “passionate” after seeing her unique performance.

“I chose Partita in E major because it was the first Bach solo I ever played as a child,” Koh said. “Bach is one of the composers who have accompanied me throughout my life and who have been important to me.”

She then clarified her choice of Partita in E major. Koh explained that she envisioned a rebirth after the pandemic and looked forward to celebrating life with people, a feeling that could be recounted for many.

“Playing the solo violin is lonely. It’s like a personal diary or an emotional archive,” Koh said. “Sharing it feels like presenting a vulnerable side, and there’s something beautiful about communication where it makes us feel safe enough to be able to share.”

She also expressed her desire to help artists who have been affected by the pandemic. She also drew attention to the need to encourage new artists to continue their work in order to avoid the loss of the next generation of artists. His board was able to micro-order 20 freelance composers recommended by his colleagues.

“Artists can imagine a path to [of constraints] and lead us to an ideal world,” Koh said. “We can allow the idea of ​​expansion to include people who haven’t necessarily been heard before in classical music.”

Koh highlighted how music can be used as a form of activism, pointing to colleagues who have written about police brutality through music. In turn, she encouraged that we all listen to each other’s stories.

Despite the inconveniences of the pandemic, I thought Koh was able to draw the positives from life and pass on the lessons she learned as a solo violinist. Just as Koh pointed out, we should all listen to members of our community and take the time to learn about their struggles, especially when difficulties arise.

Composer Anders Hillborg on creating synthetic sounds, his studies with Brian Ferneyhough and the influence of the Beatles