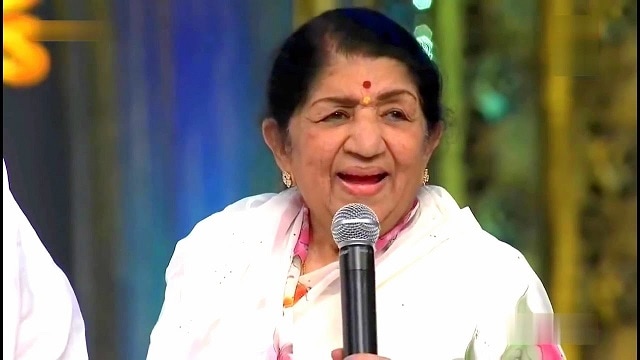 The Veteran Singer’s Most Enduring Songs, From the 1940s to the 2000s-Entertainment News, Firstpost

In an interview with this writer, singer-songwriter Sona Mohapatra claimed that there were barely eight out of 100 songs in a year in Hindi cinema, which were sung only by a female singer. She said it was a travesty in a country that celebrated veteran singer Lata Mangeshkar’s legacy from the 1940s for the next six decades.

While it’s a disservice to his immeasurable talent to nitpick a few of his songs, after much deliberation, here are the Nightingale of India’s most memorable songs, throughout his 70+ year career.

There couldn’t have been a more poetic song to dedicate to Mangeshkar’s iconic career than this song from Vijay Anand’s 1965 romantic drama filmed about Waheeda Rehman and Dev Anand. Shailendra’s lyrics are truly front of the pack here, but her resonance wouldn’t have soared without the music of SD Burman and the voice of one of timeless grace.

This song from the director of Gulzar in 1977 defines what will be called Mangeshkar’s legacy. Featured on Hema Malini and Jeetendra, this RD Burman song explains why it will be remembered for decades -“Naam gum jaega, chehra ye badal jaega; Meri aawaz hi pehchan hai, gar yaad rahe” [The name and face will fade but the voice shall remain immortal]. Although it’s a duet song [paired with Bhupinder]this one had to make the cut only because Mangeshkar leads the piece with his distinguished voice.

Represented on Malini Again, this haunting track by Khayyam from Kamal Amrohi’s 1983 period drama is an understated gem of Mangeshkar’s illustrious career. She has often said that it’s a song that stuck with her after recording, unlike many classics she had sung in the past. It must have a lot to do with the way Khayyam arranged the song, where Mangeshkar was able to jam not only with the musical instruments but also with breaks, to present a unique blend of melody and restraint.

There couldn’t have been a finer touch to Raj Khosla’s 1964 psychological mystery film than seeing Sadhana announce that rather celestial number to Manoj Kumar in black and white. Music composer Madan Mohan peppered this evergreen song with playful interludes but also allowed Mangeshkar to leave an indelible impression on listeners with her voice, which was too melodious to belong in this world.

When Mangeshkar sings to you about how to lead your life, you listen. Why not you, given his angelic voice? Although there are a few lines from Mukesh here, Mangeshkar leads the way in an inimitable way, in this song from Manoj Kumar’s 1972 film. Composed by Lakshmikant-Pyarelal, the track was filmed about Nanda and Kumar.

Another life lesson, or more philosophical musings, immortalized by Mangeshkar. This 1960 film had Meena Kumari, the Queen of Tragedy, happily singing a Shankar-Jaikishan song. Their music, along with Shailendra’s meditative lyrics, revived the inherent optimism in Mangeshkar’s eyes. Kumari only sounded ethereal, not even remotely odd, lip-syncing to Mangeshkar’s honeyed voice.

This song makes the list to demonstrate Mangeshkar’s unparalleled range in emotion of various moods. Filmed again on Kumari, Mangeshkar turns around from ‘Ajeeb Dastan Hai Yeh‘, bringing a much-needed touch of melancholy to Ghulam Mohammed’s posthumous Thumri-inspired song. The loop, both in its vocals and in its arrangement, only added to the track’s appeal, rather than lending it a kind of monotony.

Another Madan Mohan composition from another Raj Khosla film, from 1966, the haunting title track will continue to give avid fans of Mangeshkar’s songs strength. While the film witnessed his sister Asha Bhonsle’ dance songJhumka Gira Re‘become more popular overtime,’Mera Saaya Sath Hoga‘, filmed on Sunil Dutt, encapsulates both the spirit of the story and our articulation of what the veteran singer leaves behind.

Although there was an equally popular male version of this song by Anup Ghoshal, this rendition by Mangeshkar has stood the test of time. Her heartfelt voice highlights the latent emotion behind the lyrics, penned by Gulzar. RD Burman’s track was a new gem among all the dance/disco songs he composed in the 1980s, and Mangeshkar spared no effort to make it stand out in his impeccable discography.

While Mangeshkar had collaborated with composer AR Rahman in the past [‘Jiya Jale’ from Dil Se and ‘O Palan Hare‘ from Lagaan], it was the first time that the two singers met together in a song. Rakeysh Omprakash Mehra made it possible with his 2006 film. The song highlights the emotional bond between a mother and her son, and the powerful emotion behind this jugalbandi could not have been captured by any other singer[s]. Rahman had mentioned that his father used to pray to an image of Mangeshkar in a white saree before composing music. This song, along with her entire career, explains why she needs to be talked about before embarking on any musical journey.