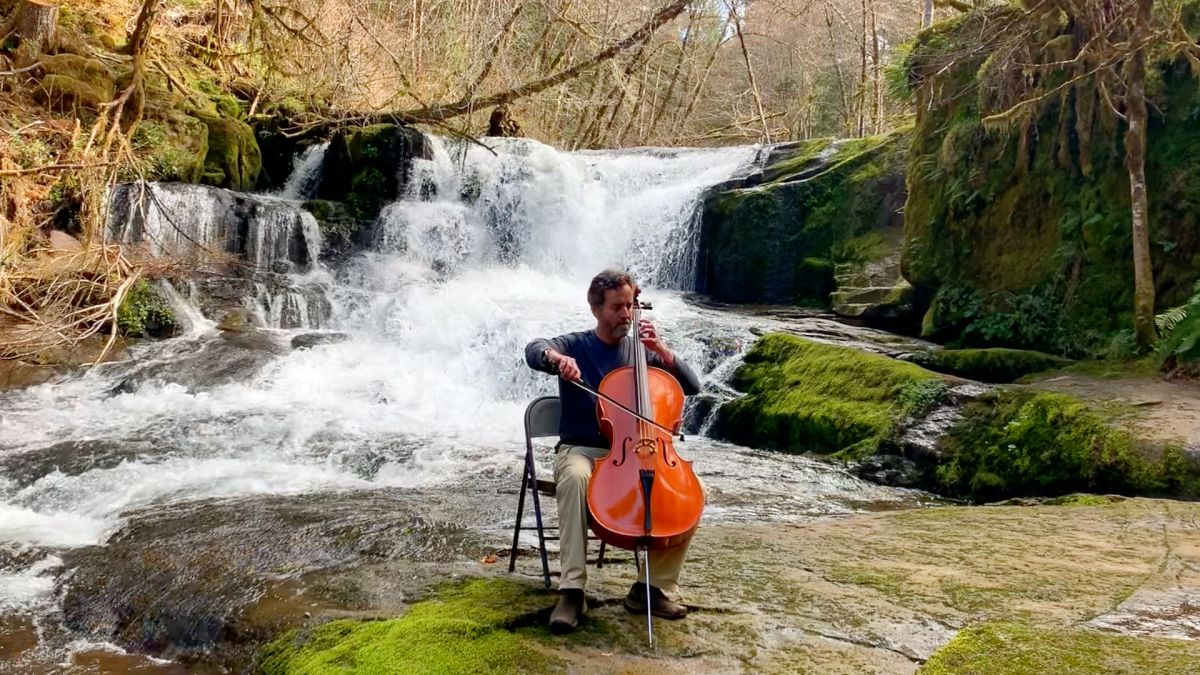 Joe Harchanko is seated, holding his cello. His bow touches the strings and he strikes up a soothing Irish folk tune, Si Bheag Si Mhor. As he plays, a waterfall cascades behind him, and to his right a stream tumbles over the rocks.

Si Bheag Si Mhor’s video is one of 12 pieces that currently make up Harchanko’s “Oregon Outdoors Music Project”. Each piece is a song played by Harchanko and paired with outside visuals.

Harchanko, a professional musician from Salem, embarked on this project in the spring of 2020. After his live performances were canceled and he found himself stuck at home, he searched for a way to stay creative and continue to happen during the pandemic.

He discovered this in the Oregon Outdoor Music Project.

“When our usual creative outlets were closed, it was a replacement for live performances, but it grew from there to become its own thing,” Harchanko said.

This project was also a way for Harchanko to combine two of his favorite things: nature and music.

“When I’m making music, I often want to go hiking. When I’m hiking or camping, that’s when I get ideas and want to go back to the studio to create them,” Harchanko said. “This project is a great way to bring these two worlds together.”

Last winter, Harchanko created a piece for the project inspired by snow. Together with a colleague, they recorded a song which Harchanko took to the editing studio and “entirely reinvented the music in an electronic setting”. Bleak, as the piece is titled, is accompanied by snow scenes of the Cascades and the Willamette Valley.

“It started with the cello, but it ended up in a kind of electronic realm. And, really, for this piece, the music and the video came together at the same time,” Harchanko said.

Several other pieces in the project are of Harchanko performing Bach compositions on location. In six videos, Harchanko performs Bach’s First Suite in various spring locations, among lavender and cherry blossoms.

“Each of Bach’s Suites always reminds me of a particular time of year. The first sequel for me is a spring sequel,” Harchanko said.

Another piece came to light recently when Harchanko was scrolling through his phone and came across an iPhoto-created video of a family trip to Baskett Slough Wildlife Refuge. Inspired, he sat down and created an original composition based on the images, which he published together with the photos under the title “Images of Life I. Basket Slough”.

This project allowed him to explore space both musically and visually. As a composer, Harchanko says people always do the visual component for him, whether it’s movies or concerts or whatever. But this project forces him to take on the role of visual creator, and he finds inspiration in his own outdoor photography.

Going forward, Harchanko plans to continue adding parts to this project, even if in-person performances return.

“I constantly rethink what it means to be a composer and a cellist. I think it’s unrealistic to just focus on live performance and I love this medium as a creative outlet,” said Harchanko.

To see and hear more from the Oregon Outdoors Music Project, visit Cellotopia on Youtube.

Eddy Binford-Ross is an outdoor intern at the Statesman Journal. Reach her at [email protected] or follow her on Twitter @eddybinfordross.

This article originally appeared in the Salem Statesman Journal: Salem cellist combines love of music and the outdoors in new video project

Best Rachmaninoff Music: 10 of the Composer’s Greatest Works of All Time